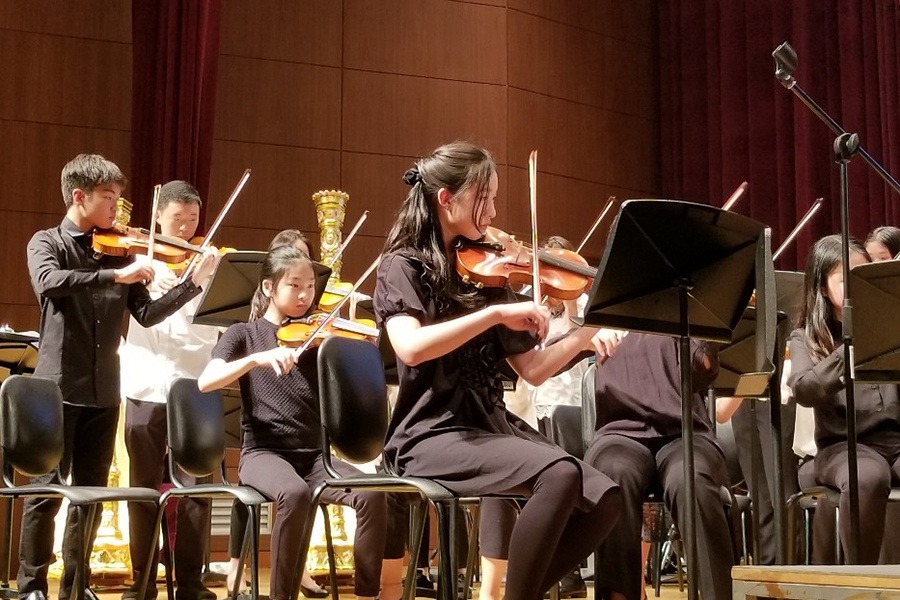 The last concert of the Spring Concert Series was the Middle School Pops Concert, a collaboration between the bands and orchestras, which took place the evening of Tuesday, May 21. Pre-concert music was provided by Helen P. (8) – saxophone, Christine J. (8) – clarinet, Emily S. (7) – violin, Chloe P. (6) – cello, and Claire C. (8) – gayageum.

The actual concert began with a performance by the Elementary After School Strings. Ten of these elementary students performed one song by themselves, and then they were joined by the 6th Grade Orchestra for another. They did an outstanding job on, what was for some, their first orchestra performance. 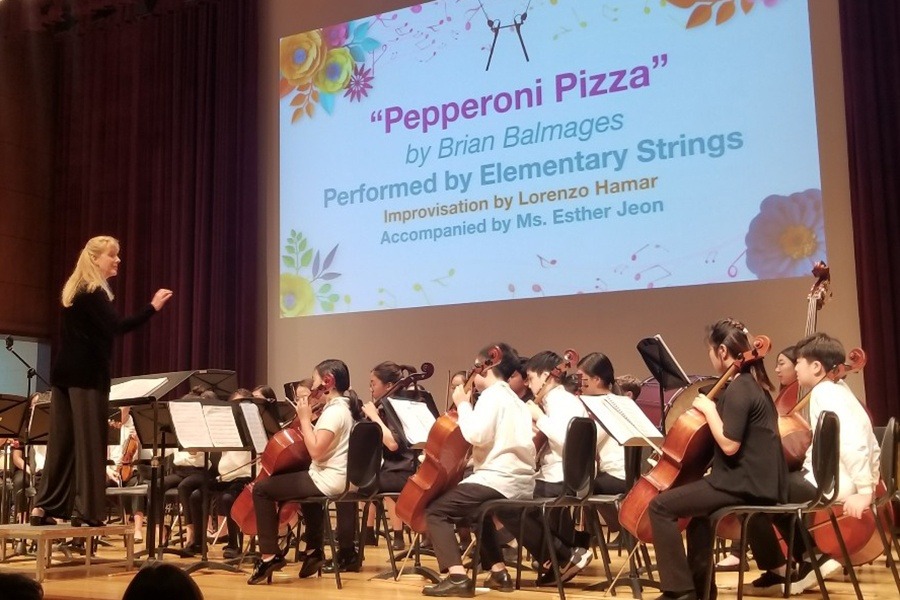 The elementary students were followed by the Preludium Strings (6th Grade), Sinfonia Strings (7th Grade) and Chamber Strings (7th and 8th Grade). Pieces performed included works by Coldplay with soloists Soul J. (6) and Chloe P. (6), plus a wide variety of pop music, such as "Music from Avengers" and "Escapade For Strings." One humorous number was presented by Sinfonia with Owen S. (7) featured as the "guest artist" on “Remote Control” written by Richard Meyer. Two special works were performed by a mass ensemble of all three middle school orchestras. The resulting sound was amazing and definitely a "goosebump moment." 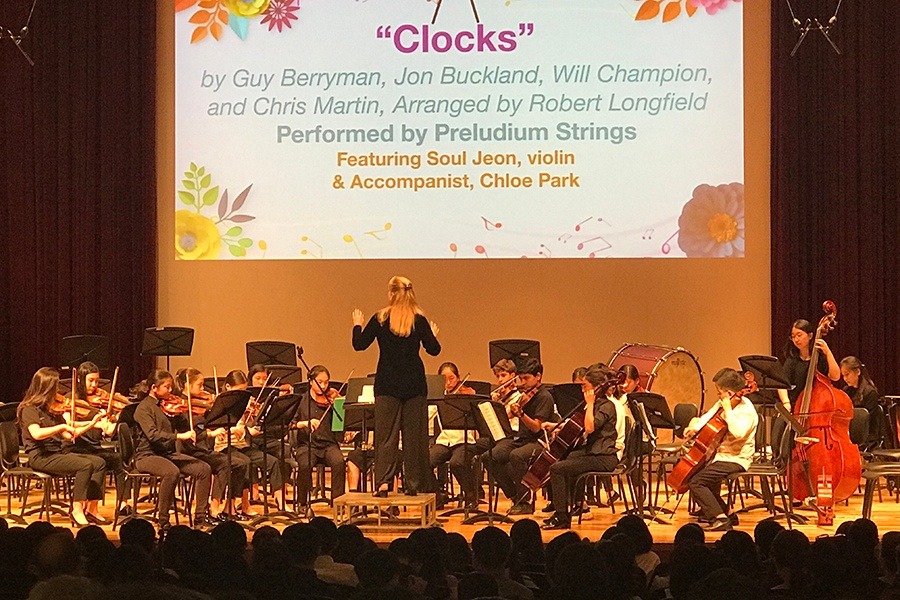 Following the strings groups, middle school band took the stage. The 6th Grade Concert Band has come a long way over the course of the year, with most of their students going from never having played their instruments to this concert, where they were playing music from famous pop songs and movies. This band played three pieces, the favorite of which for this class was the pop tune "Shut Up and Dance."

Next, the Symphonic Band, with members from 7th and 8th grade, wowed the crowd with a couple of tunes of their own, one of which featured a compilation of famous Beatles songs. Combining with some members from Tri-M Strings and Wind Ensemble, the Symphonic Band finished out their portion of the evening with the famous John Williams composition created for the movie Jurassic Park. 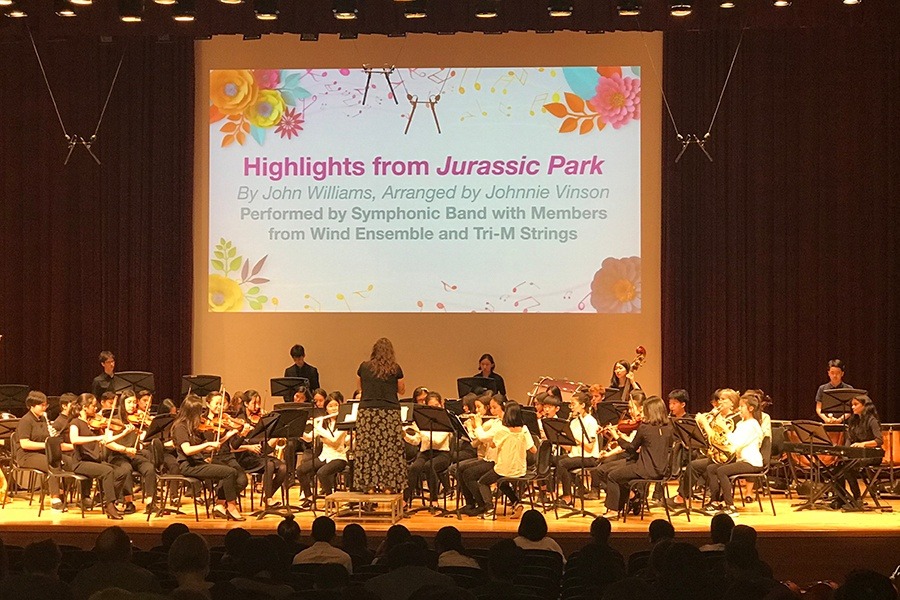 The final group of the evening was the Wind Ensemble. This group got the crowd's attention with a medley of songs by rock band Queen and concluded the evening with the famous theme from the Marvel movie series The Avengers. This concert was a great representation of the work accomplished in the band room this year, and for Ms. Palmer, it was "a great last concert at YISS to end with the same students [she] started with and to see how they've grown as people and musicians throughout the years." 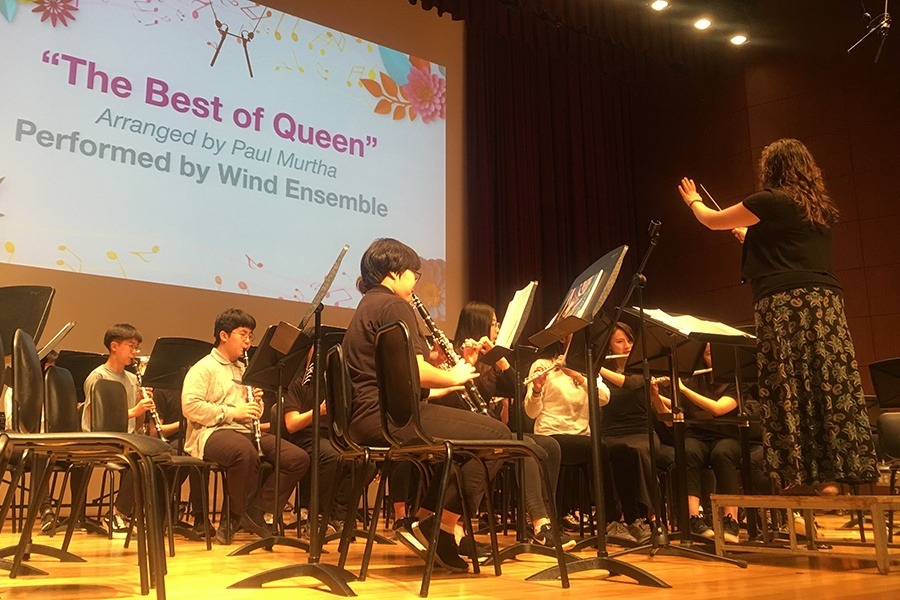